In Syria, rock bottom has no bottom at all

by DAVID MORLEY, President and CEO of UNICEF Canada
When we are wrong, we must have the humility to admit it. Last year at UNICEF, we were wrong.
We told you that Syria had hit rock bottom. That with nearly 1,000 children killed or maimed in 2017, the conflict had brought levels of suffering to new lows.
We were wrong. Because in the first two months of 2018, things have become far worse.
More than 1,000 children have been killed or injured this year. At this pace, the child death toll at the end of the year will be utterly incomprehensible.
In Syria, it seems as if rock bottom has no bottom at all.
This is a crisis of epic proportions, one that is nestled in an even larger tragedy: seven years of war causing mass casualties among children. The conflict is entering its eighth year and we are running out of words to describe a suffering that has reached even more extremes.
More than 13.1 million people in Syria require urgent humanitarian assistance, including 5.3 million children. The past few weeks have proven particularly devastating. Since an offensive on Eastern Ghouta began on Feb. 18, it’s 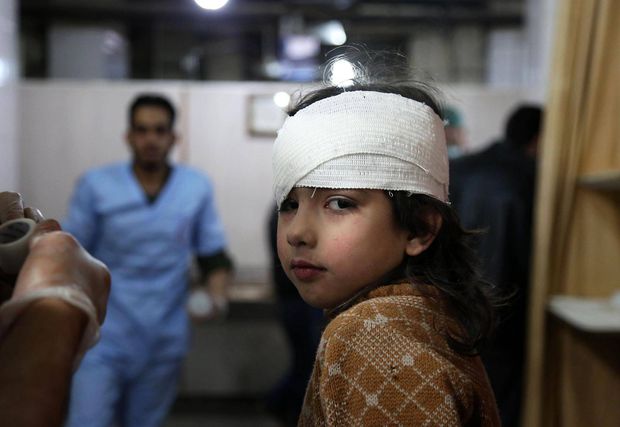 estimated that almost 600 people have been killed and more than 2,000 injured. The UN Security Council Resolution that was unanimously adopted to allow for a 30-day ceasefire and the safe delivery of aid into the besieged area has had little impact. Inter-agency aid convoys have been forced to pull out early because of heavy shelling, before even being able to deliver all of their supplies.
Syrians are now taking to living in underground shelters, dangerous and dirty as they may be. They are the last resort of people for whom even a breath of fresh air is a fresh chance to be killed.
There will be no winner in this war: Syria has lost too many children for any semblance of victory. There will only be those who are left to pick up the pieces of a bloodied, shattered land. And because misfortune rarely comes one at a time, Syria is not the only country marking another year of death and destruction.
Another tragic anniversary will be upon us this month as Yemen enters its fourth year of war. There, the first 1,000 days of fighting left at least 5,000 children dead or injured. In the last week of January, 2018, alone, 50 children were either killed or maimed and the toll continues to rise.
UNICEF is working in both Syria and Yemen, providing safe water, vaccinations, nutrition and education. We are trying to give children protection and some semblance of normalcy amid the horrors. But for as much as we plead for more support and greater access to help those most affected, we also plead for a political solution. Humanitarians do their best to alleviate suffering, but they cannot end this war.
And so we continue to mark these sad anniversaries. Not to commemorate – the time for remembrance will come. When we stop to think of all those children who lost their lives in needless, selfish violence. All those families torn apart too soon. When we put names and faces to the numbers. Right now, however, there is no time to stop. The longer we take to think – to act – the death toll rises higher.
We mark these anniversaries to underscore the global failure to bring about peace. We have lost too many young minds on the front lines and we’re all the worse off for it.
Let these anniversaries be a reminder to us all of the high cost of war, especially on our most vulnerable children.
And let these anniversaries prompt urgent and decisive action to end these conflicts once and for all.
Rock bottom without any bottom at all is no place for a child to be.